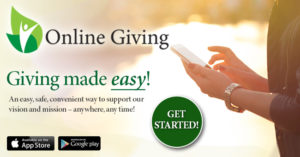 It’s very easy to do – click here for instructions on set up  osvhub.com/holyfamparma/funds

The January offertory envelope packet has been delayed by the postal service. We would expect that you will receive them sometime during the week of January 3, 2021. If you wish, you may use a plain envelope marked with your name and address or take advantage of our online giving option above. We are sorry for the inconvenience. Please contact the parish office with any questions. Thank you.

Please pray for the recently deceased of our Parish Community

Eternal rest grant unto them , O Lord, and let perpetual light shine upon them .
Through the mercy of God, pray for the repose of the souls of all the faithfully departed.

Text App to 88202 to obtain the link to download the app to your phone. We feel this app allows us to better communicate with you throughout the week and keep you updated with relevant parish news or updates. The app is very well designed and very intuitive. It is a great resource; providing daily Mass readings, Catholic news and prayers, convenient prayer and Confession reminders, our bulletins and more. We hope our app is a tool for fostering stronger parish life at Holy Family.

The 2020-2021 School year began on Thursday, August 27, 2020. Please use extra caution in our parking lots and slow down in the school zone on York Road. For information about our school please call 440-842-7785. A virtual tour of Holy Family School is available on their website www.HolyFamilySchoolParma.org.

News of the Diocese

The Sunday TV Mass has moved to a new TV channel, and a new time! The weekly television Mass produced by the Catholic Diocese of Cleveland has moved. Starting on Nov. 22, the Sunday television Mass will be seen at 10 a.m. on WUAB Channel 43, the CW43.

This change provides viewers with an opportunity to take part in the weekly celebration of the Mass at a much more convenient time. In addition, WUAB Channel 43 is an over-the-air station that is accessible even to those without cable TV. Those with cable TV need only to check their local cable system listings to determine where WUAB is located on their local channel line-up.  The weekly TV Mass is produced by the Diocese of Cleveland and it originates from the Cathedral of St. John the Evangelist in downtown Cleveland. The televised Mass has been a staple of religious programming on Northeast Ohio airwaves for decades, cultivating a dedicated and faithful following. It is hoped that viewers will continue to tune in on this new station at this new, more convenient time.

The TV Mass also can be accessed on demand starting Saturday evening and running throughout Sunday on the Diocese of Cleveland website, dioceseofcleveland.org. In addition, the Mass can be heard on the radio, at 4 p.m. Saturdays and 10:30 a.m. Sundays on AM 1260 The Rock. Also, radio station WINT-1330 AM airs the Mass at 9 a.m. each Sunday and Cox Communications cable subscribers can view the Mass at 11:30 a.m. Sunday on channel 45.

We, the people of Holy Family Parish in Parma, Ohio, were established in 1872 as a community of Catholic faithful;  We worship God in the celebration of the Eucharist;  We evangelize through Jesus Christ, sharing the great message of salvation;  We foster community as a spiritual home for all in our parish;  We promote Catholic education and faith formation for all ages;  We extend loving service to the poor, sick, and needy;  We develop Catholic leaders and encourage participation in ministries by using our time, talent, and treasure;  We  strive to follow the example of Jesus, Mary and Joseph, the original Holy Family.